Menopause typically occurs in women in midlife, during their late 40s or early 50s, and signals the end of the fertile phase of a woman's life.

and lack of energy

Cynanchumwilfordii: The Scientific name of origin is CynanchumwilfordiiHemsleyand medicine is called Cybanchiwilfordi Radix. The plant is called in China as Ge Shan Niu Pi Xiaoor Baishouwu. It is also called as Baek-ha-su-o or Baek-su-o or Eun-jo-rong in Korea. It has been used for centuries for traditional herbal treatment and is classified as raw material for food by Korea Food and Drug Administration.

The plant has been used for centuries for traditional herbal treatment and is classified as raw material for food by Korea Food and Drug Administration. This traditional herb is recorded in Dong-Eui-Bo-Gam (Heo, 1610) that the root of the plant shall be taken for lumbago, disease after childbirth, sterility and fracture. According to the Korean most reliable handbook, it helps stop pains, skin recovery, and putting together of muscles and bones as its name stands for (in Korean the name Sok-dan meaning “connecting of the cut”). It also has the effects on diseases after child delivery.

Dang-gui: The scientific name of origin is Angelica gigas NAKAI and the medicine is called AngelicaeGigantis. The original plant of Dang-gui is classified as plant for tea or other drinks by KFDA. Dang-gui is highly respected in Traditional Chinese Medicine, second only to ginseng. It is commonly used to treat women’s reproductive health issues, but is also recommended to help prevent and treat some forms of cardiovascular disease.

Dang-gui roots contain phytoestrogens, which are chemicals found in plants that mimic the effects of estrogen in the body. Dang-gui is said to help balance women’s hormone levels, both restraining and supplementing the body’s production of estrogen as needed. It is used to treat menstrual and menopausal symptoms, including migraine, cramps, mood fluctuations, and hot flashes. It is also said to help speed a woman’s recovery from childbirth and symptoms of low energy/chronic fatigue.

Dang-gui helps relax the smooth muscles throughout the body, which makes it a potential treatment for a variety of illnesses. Not only does dang-gui relax the smooth muscles of the uterus, but it also keeps the smooth muscles in the arteries dilated, helping to maintain regular blood flow and heartbeat. Dang-gui has been used to treat angina, high blood pressure, and irregular heartbeat. Some studies have shown that the antispasmodic, dilating effects of dang gui may help treat chronic pulmonary hypertension in people with chronic obstructive pulmonary disease (COPD), especially when taken in combination with the drug nifedipine.

Dang-gui contains phytochemicals that help boost white blood cell production and fight inflammation, and may improve liver and kidney function. It is traditionally used to treat inflammatory diseases such as arthritis, and is currently being studied for its ability to prevent or treat cancer, liver and kidney disease.

Both studies showed significant improvement (P < 0.01) with menopausal symptoms, such as Hot Flashes, Vaginal Dryness, Insomnia, Nervousness, Depression, Pain, and other symptoms (total of 10), without any significant side effects and changes in FSH, E2, Fasting Glucose, Weight/BMI, Protein, Albumin, and Serum Safety Factor. 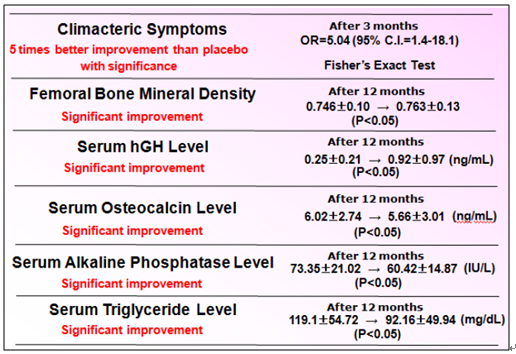 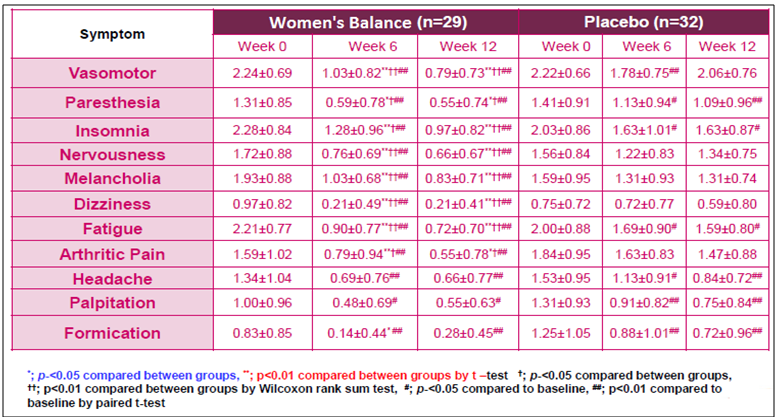 Q.  What is Menopause?

A.  Menopause means cessation of menstrual cycle. Medically, if a woman stopped having period for 12 consecutive months, she is said to be in menopause. Typically this happens when woman turns 50 all women go through menopause, mostly when they turn around 50 and some go through early if they have surgery such as hysterectomy or breast cancer. And 8 out of 10 women show one or more of the symptoms. 3 of the 10 women show symptoms that are so severe that it interferes with their daily life.

Q.  What are the symptoms?

Q.  What treatments are available?

A.  The ways to treat these various menopausal symptoms are basically two-fold: Doctor-prescribed medicine known as Hormone Replacement Therapy. It is literally hormone extracted from animal, and had been widely prescribed until National Institute of Health-sponsored clinical study, involving 16,000 women, in 2002, called WHI (Women’s Health Initiative), was revealed. In its announcement of the result in 2002, the results showed very serious side effects. Chance of strokes increased by 44%, blood clotting by 100%, Cardio Vascular Diseases by 29% and Breast Cancer by 26%. NIH stopped the clinical study and subsequently issued what’s called Black Box Warning, instructing physicians to warn its patients of the dangers.

The other alternative, the natural remedy, is the use of phytoestrogens, or plant extracts. The most popular choice was extracts from Black Cohosh, which was originally invented in Germany. However, several clinical studies in recent years showed that it is not any more effective than the placebo group. Additionally, it was found that the black cohosh caused serious liver damage.  After this danger to liver was announced, the sales have plummeted.

Another popular phytoestrogen is Isoflavone. However, the efficacy was weak, and also, in 2008, NIH released a report showing that the active compound in Isoflavone, Genistin, is carcinogenic, or cancer-causing.

Q.  What is WOMEN’S BALANCE?

Q.  Was there a human clinical study?

Recognized by the doctors, it has naturally became the number one choice of supplement for women with menopause in Korea, and now the same product has become available in the USA. The US study which completed last year at a hospital in Orange County, CA, it showed improvement in 12 symptoms + increase in human growth hormone. This increase in human growth hormone means women will have increased energy as well as more youthful, elastic skin tone.

Q.  What are the other benefits of WOMEN’S BALANCE?

A.  One of the main symptoms of menopause is dry skin and dry eyes. With WOMEN’S BALANCE, women’s skin will gain its youthful look. Dryness in the eyes will also improve. Also, in the clinical study, there was no weight gain in the women who took WOMEN’S BALANCE.Another key finding was it increased the bone density by 2.2%. Osteoporosis is very common in women after menopause, and this is a very beneficial outcome.

A.  With Gold medal awarded at Geneve’s International Invention Conference in 2008 and Chang-Young-Sil award, the top scientific award in Korea, in 2009, the product has been touted as the best and safest phytoestrogen in the world. Also, it won the South Korea’s presidential award last year as the top nutritional product exported to other countries.  It is currently number one product in Asia in the women’s health category.

Q.  What are the core ingredients?

A.  The name of the ingredients, called EstroG-100, is the sole and main ingredient in WOMEN’S BALANCE, and it is 100% all natural plant extracts from PhlomisUmbrosa, CynanchumWilfordii and Angelica GigasNakai. All the ingredients have been used over 400 years in Korea and China as traditional folk medicine, and is now available for the first time, to the Vietnamese community. You do not have to worry about all the symptoms of menopause anymore, and you do not have to sacrifice your active lifestyle for unnecessary risks posed by hormone therapy. The all natural 100% plant extracts of WOMEN’S BALANCE will give you the comfort and relief you rightfully deserve.

We guarantee money-back guarantee, and if you do not improve your health within 3 weeks, there will be full money back, no questions asked. This is number one product in Korea, capturing 95% of the women’s health category. Women from their 30’s to 80’s take our product.

Most of all, it is safe. We have secured both US FDA and Health Canada’s approval. Also, our ingredients are registered with World Health Organization to be liver-protective. You can verify this at WHO website.